It seems that actually having a baby and taking care of a baby precludes the possibility of writing about and posting pictures of said baby. So my plan to post early and post often has fallen by the wayside. Sam is eleven days old, he has been home for one week, and everything is going fantastic. And we’ll have to leave it at that for now. There will be more later, I promise. But for now, eeek! Where does the time go?

Sam’s 11 days old. He got to cruise up and down the driveway in his stroller. Apparently he found this rather amusing. 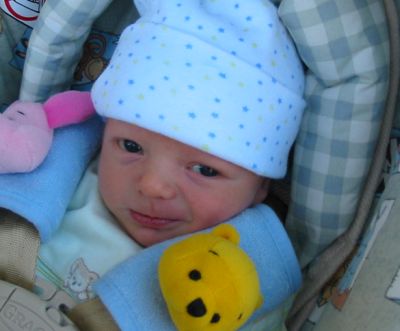 Glory days! The tube is out! The doctor decided that her squiggly areas were finally working the way they should, and so the nurses came in and yanked that tube out of her throat. And I was taking a shower, so I missed it all. I heard voices, and then when I came out, Viola was sitting there sans tube. It’s so great for her. She couldn’t swallow, she could hardly breathe, and she definitely couldn’t eat anything. All she’d had to eat since the surgery was ice chips. But today, soon after they extubated her, they brought her sherbert and hot tea and cranberry juice. They also brought some kind of dark broth, but she deemed it too disgusting for human consumption and banished it to the corner.

So now she only has one foreign instrument entering her body, the IV line. And they say that’s going away soon. And then she’ll be free and clear, not tied down to anything. The eight-inch slit in her belly, and the staples holding it together, are going to be a different story. But we expected those. They weren’t thrust on us at the last second.

Sam is still doing fantastic, as usual. And still sleeping. He was relly fussy yesterday, but he’s chilled out a lot today. He’s happy just to lay back and doze off for a while. He’d rather I didn’t change his diaper, but, you know, can you blame him? He has a fresh circumcision scar down there. He doesn’t want that being exposed to the chilly air.

It’s happened. Sam is here, and we’ve spent two very harried days in the hospital now. Sam was born Thursday morning, the 18th, at 8:18am. And somehow, he turned out perfect. We weren’t expecting to have a baby that was so healthy. We figured that with Viola’s track record, there would at least be something wrong with him. But no, he was fine.

Viola herself is a diferent story. Shortly after the surgery, she had an ileus. Now, I didn’t know what an ileus was until the other day, but it’s nasty stuff. You see, all people who have abdominal surgery have a condition where their intestines stop working because of the shock of the surgery. Usually the muscles start flexing again and everything turns out fine after just few minutes. Viola didn’t quite spring back so well. Her intestines stayed inactive, a huge gas bubble formed, and she was pronounced with an ileus. They put a tube down her throat to keep things drained, and prescribed bed rest until her insides started flowing again. As of right now, 50 hours after the surgery, she still has the tube. But the nurses are optimistic! Now we just have to wait for the doctor to give her the greenlight, and drag that tube out of there.

Sammy doesn’t seem to mind that his mommy is in this condition. Right now he’s still a little upset to be on the outside, and he wants back in where it was comfortable and warm. He’s getting used to us, though. He’s sleeping a lot and not crying too much. His favorite place to sleep, of course, is on his mommy’s stomach. I guess he doesn’t have a choice but to get used to it all. Too late to turn back now! 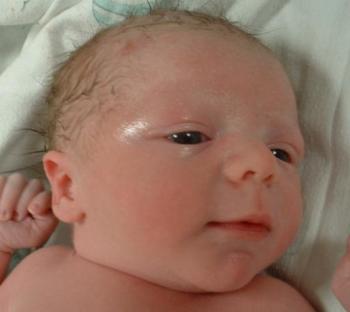 T minus two days and counting. In 52 hours we go to the hospital to start the prep work. In 54 hours the knives come out and the Cesarean begins. Viola has done excellent this whole pregnancy. She’s been a champ to beat all champs, and for her to get through this with her cerebral palsy, that’s just unbelievable. There’s a strength there that I could never muster. She was at work up until week 39. She didn’t stop working until last Friday. It’s tough on her; I can see it. It’s hard and getting harder every hour. But she keeps at it.

I could never do that. I would have taken the guest bed.

Yesterday we had another one of our ten-second ultrasounds. I guess that’s a good sign when they spend longer prepping you for the ultrasound than actually doing it. If there were something wrong, we’d see the doctor stop at a certain spot, go back and forth, zoom in, take a snapshot, leave the room for a minute, come back in, go back and forth over the area again, measure it, get another doctor to come in, etc. None of that happens. A quick sweep across the belly, a closeup of the heart, and he’s done. “See you next week!” Of course, we’re always there last thing in the afternoon, and the doctor is usually in a rush to get home. So we probably don’t get the full treatment. But it’s still comforting that we’re getting rushed out of there. If the doctor lingers at the end of the day, that’s not the best sign.

Of course, this time “see you next week!” was replaced by “see you at the delivery!” The day is coming up; we won’t even know it and then it’ll be there and then there will be the crying with the diapers and the feeding and the noises with the baby clothes and the cootchie coochtie coo and oh boy what are we getting into?

The countdown sits at 0 weeks, 6 days.

The design is coming together ever so slowly. The animals have now joined the party there on the right-hand side. Everyone wants to be a part!

We have another doctor’s appointment tomorrow, probably the last before the birth next Thursday. I better get to sleep so I’m alert for it!

Okay. Now that I’ve gotten some of the administrative tasks out of the way, where should I start? Today we headed up to Reno, because my mother and Viola’s mother had to attend the “Grandparent’s Class” at Saint Mary’s hospital. This class is supposed to teach the stubborn grandmothers that everything they knew about raising children in the 70’s was wrong, and here’s the right way to do it. It also teaches them the fine art of butting out and letting us raise our own children for ourselves. We have plenty of mistakes to make along the way; we don’t need them telling us how to make them worse.

Anyway, since we were all up there, after the class we went shopping at Babies R Us, hoping to spend the $40 gift certificate we got at the baby shower and perhaps find the perfect little coming home outfit for Sammy. We did both. We not only spent well over our allotted $40, we also found that the outfit, that they previously had only had in size 3–6 month, was finally available in newborn size. This little outfit shows all manner of jungle animals running across the front, as if they’re on their way to meet Sammy coming home from the hospital. We had been waiting for them to get it in a size that would fit him, and we were so relieved that it finally happened.

We also bought way too much other stuff, and spent way too much money. But that’s a story for another day. I’ve got to get to sleep now.

This is the first post of Sammy’s BabyBlog. This is something I should have started a long time ago, but there were too many real world things going on, and I figured that I’d get around to doing it “one day”. Well, we have eight days left until he’s born, so I guess it’s time to get cracking! This site is still pretty ugly. No, I mean really ugly. Like crazy ugly. But it’ll get better. Right now I just need to start writing before it’s too late. So, let’s get this party started!!

This weblog is of, for, and about Samuel Olin Schrantz. He is the newest member of the Schrantz family, so new that he isn’t even an official member yet. His birthdate is planned to be September 18th, 2003. Given that right now we have about half an hour left to go on September 9th, you can wisely deduce that he hasn’t been born yet. Not even born, and he has his own website. Wow. In twenty years he’ll look back at this and say, “A website? How lame.” It would be like my dad telling me I had my own CB handle before I was born, or that they named a roller rink after me.

Anyway, I’ve been chronicling Sam’s gestation so far on my main weblog, but I knew that sooner or later he’d need his own space. So this is where you’ll find him. I have plans to flesh this out into a full-featured online baby book, with pictures, sounds, videos, milestones, and of course a weblog. Time will tell how well I do at that. But at least I have a place to write about the last week of pregnancy, the birth (Caesarean delivery) and the aftermath. A way to record those memories when they’re fresh so they won’t be completely forgotten. A place to sit down and work through what I’m really feeling. And, of course, a place to brag like any new parent. And it might actually get two or three readers!